If you want to learn how to use piano pedals, you’ve come to the right place. In this article, Fidlar will explain what each pedal does and how to use them to create different sounds. By the end, you’ll be a pro at using all three pedals!

Three pedals are used on modern acoustic and digital pianos. There are two older acoustic pianos. Here, we’ll go over the sound effects, how to use them properly, and where to look for them in musical notation.

Keep in mind that you don’t need to worry about the pedals if you’re just getting started. Their application is a (relatively) complex method, so that you won’t see it much for a time. 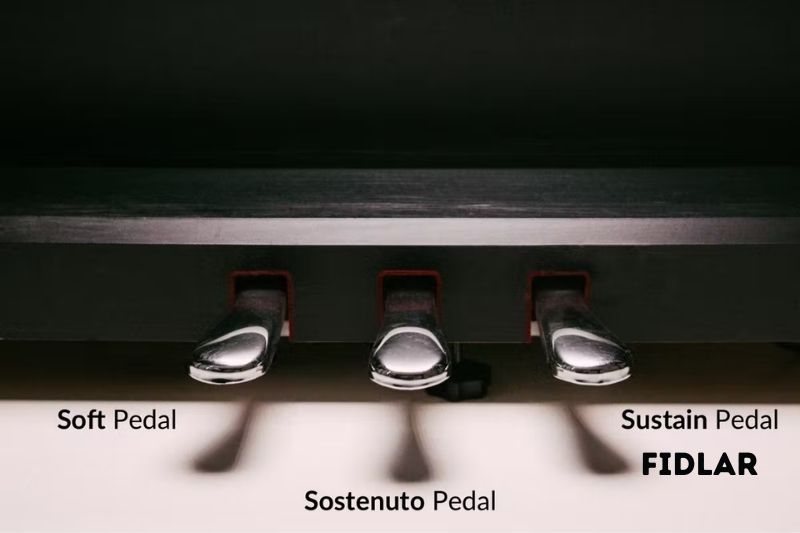 Consider investing in an acoustic piano. A “damper” pad prevents the note from ringing out when a finger is removed from a key. The sustain pedal removes the string dampers, letting notes ring out for longer even when the keys are not held down. It’s also known as the “damper” pedal for this reason.

Any piece of music or song that does not use the sustain pedal is rare. Arthur Rubinstein, the legendary pianist, dubbed it the “soul of the piano.” This is a must-have accessory if you’re studying on a keyboard that doesn’t have built-in pedals.

Most strings are grouped in threes in an acoustic piano, each tuned to the same note. The hammer strikes all three simultaneously when played conventionally, producing a full, brilliant sound. The una corda pedal on a grand piano shifts the entire mechanism to the right, allowing the hammer only to strike two of the three strings.

The outcome is a softer tone. The sound is also muffled and less loud because a separate hammer section strikes the strings.

The hammer on antique pianos would only hit one of the three strings, hence “Una corda,” which means “one string.” Pushing the pedal on an upright piano brings the hammer mechanism closer to the string, softening it but not changing the tone.

Because the sostenuto pedal is a relatively new feature to the piano, it is rarely used in pieces written before the late twentieth century. Nonetheless, many pianists employ it while performing works by earlier, more innovative composers such as Debussy and Ravel.

How To Use A Piano Pedal 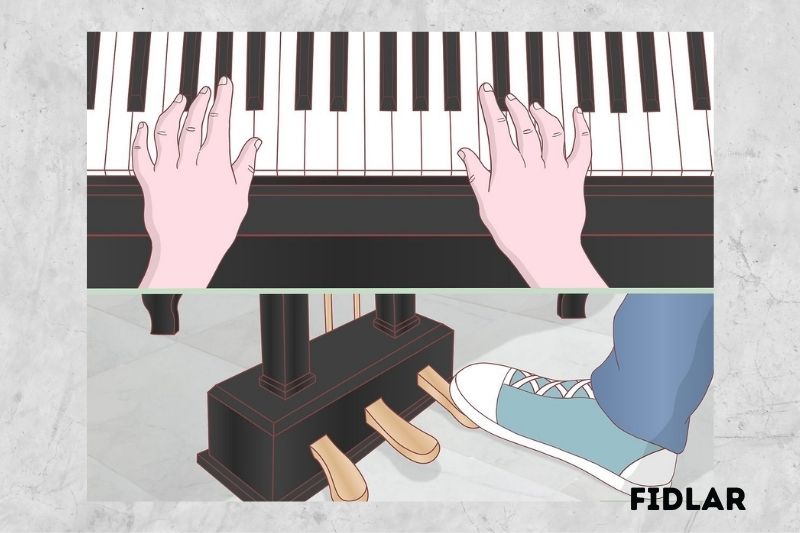 At the piano, adjust your seat or bench.

Make sure your feet are flat on the floor when sitting for the optimal posture and reach. Also, make sure you can get the pedals with both feet when playing without moving in your seat.

Position your feet in front of the pedals.

Position your right and left feet so that their big toes align with the far left and right pedals, rather than arriving at an angle. Because you won’t be able to see the pedals when playing the piano, keeping your legs and feet straight will aid you in blindly finding them.

Practice pressing each pedal down and up.

Only cover the rounded end of the pedal with the ball of your foot.
Use only the front part of your foot to depress the pedals by turning them up and down. Because raising a pedal abruptly rather than softly results in jerky chord progressions, choppy notes, and undesirable noise from the pedals, release them with gentle movements.

While playing, keep your heels on the ground.

Depress the pedals with only the ball of your foot, keeping your heels planted. By isolating those smaller foot muscles, you’re employing fine motor abilities to handle the pedals more sensitively and skillfully.

Try varying the pressure you apply to the pedals.

A pedal can be pressed down, halfway, or a quarter down. You may be able to depress the pedal in extra increments depending on the piano. Each increment modifies a different part of the piano’s sound as you play.

Play around with the pedal and listen to how the sound quality varies as you alter it.

The dampers inside the piano are raised by pressing any of the pedals. The dampers are lifted, allowing the strings attached to the piano keys to vibrate and generate sounds.

Pushing a pedal partially down only partially lifts the dampers, reducing the pedal’s effects.

Use your right foot to control the damper pedal.

The damper on the far right of your pedal set is the most usually used one. This pedal removes the dampers (or pads) from the stings, allowing them to vibrate freely without being muted.

Keep this pedal pushed to smoothly connect notes, crescendo a collection of chords, or make a piece of music resound as it concludes.

Depress the damper pedal before, at the same time, or after you play a note, according to the musical notation. Every change in time results in a different sound effect.

When the damper pedal is pressed, the dampers on all strings, including the intended ones, are increased. The vibrations of one set of strings generate sympathetic vibrations in all other strings and sustain the notes played until the pedal is removed.

With your left foot, depress the soft pedal.

When you play a note or chord whose sound quality you desire to soften, press the far left pedal. You can mute or add an ethereal tone to your piano playing by interspersing this pedal throughout a tune.

The soft pedal controls the hammer, which strikes the strings associated with whatever key you play. The soft pedal causes the hammer to strike fewer strings, resulting in a muted sound.
While pushing the soft pedal, you can still play loudly. The impact of the soft pedal will be overridden if you strike keys harder than usual. Don’t let the soft pedal keep you from learning to play softly. Without a pedal, you should be able to manipulate your fingers and play keys silently.

Use the sostenuto pedal to layer notes.

While utilizing the sostenuto, you can still utilize the damper pedal. This allows you to assign different dynamics to several notes at the same time. 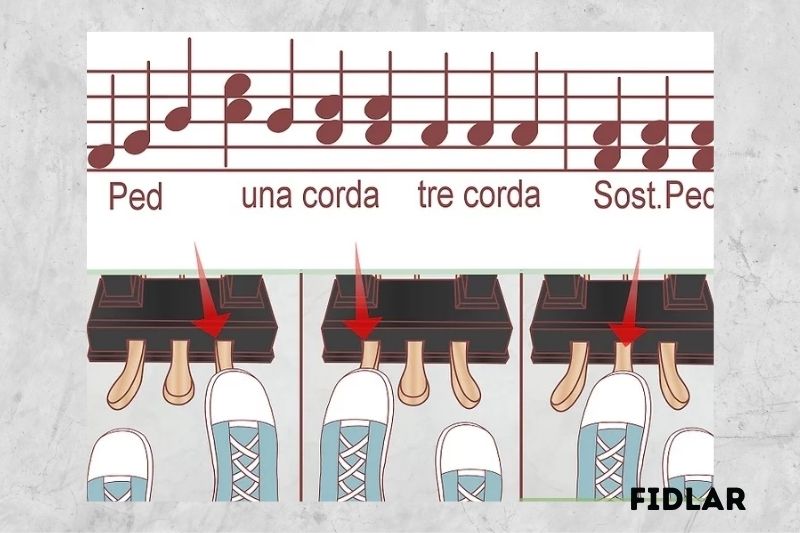 Each pedal is represented by a separate shortened phrase or symbol on a sheet of music. The treble or bass clef usually has these notations going underneath the staff.
You’ll see “ped.” in the simple or flourishing script to depress or engage the damper pedal. Soft pedal indications appear on a sheet of music as “una corda” for use and “tre corde” for stop.

The sostenuto isn’t used very often, but when it is, there will be markings on the page that say “sost. ped. A sign that looks like an asterisk (*) will appear when the composer wants you to release a pedal.

Keep your hand and foot movements in sync.

You may produce numerous sound effects depending on when you play a note or chord and when you depress a pedal. To be able to play the piano with your hands while also paying attention to where and when your feet move on the pedals takes practice.

Slowly increase your practice time so that your brain becomes acclimated to multitasking.

When you use a pedal before playing a note, this is known as preliminary pedaling. Because the dampers are removed from the keys before you play a note, the strings are free to vibrate and make a sound.

To emphasize the sound of a note, use a pedal while playing it.

Because the dampers do not muffle the strings when you play notes while keeping down the damper pedal, loudness accumulates, resulting in a crescendo that increases louder as it is prolonged.

To assist in maintaining tone quality and integrity, change or disengage and reengage the pedal frequently. Holding a pedal down can make the sound and harmonies muddy or muddled.

When there are no markers, use your best judgment.

You can come across music that doesn’t have any pedal indications. Please pay attention to the overall tone and theme of the music as you practice it. A fast-paced tune may not require much damper pedal, whereas a mournful composition may require both the damper and soft pedals for a melancholy effect.

Pedals are essential for producing interesting-sounding music on a piano and should never be overlooked. You can also use pedals to make your digital keyboard sound like an acoustic piano, with strings long enough to make the bass notes ring.

Learning to play the piano is the most effective way to learn how to make music, and the best way to do so is through online piano lessons. You can finally play moody classical music or extended beautiful chords that fade away slowly now that you know how to use sustain pedals. Make some moody piano music!