Skip to content
fidlarmusic.com and its partners may earn a commission if you purchase a product through one of our links.
This article will teach you how to read guitar sheet music for beginners. It is geared towards guitarists who want to learn the basics of music reading. Knowing the notes on the fretboard is not enough; you need to know how music works in order to be able to read sheet music.

Notation is the way that music is written down. The notation may also be called “sheet music”. Fidlar will teach you about the most common kind of notation that guitarists need to know and how to read sheet guitar music.

Staff is what you refer to as the lines and spaces between the notes on sheet music. The notes these lines correspond to will depend on whether you’re using a treble clef or bass chord. 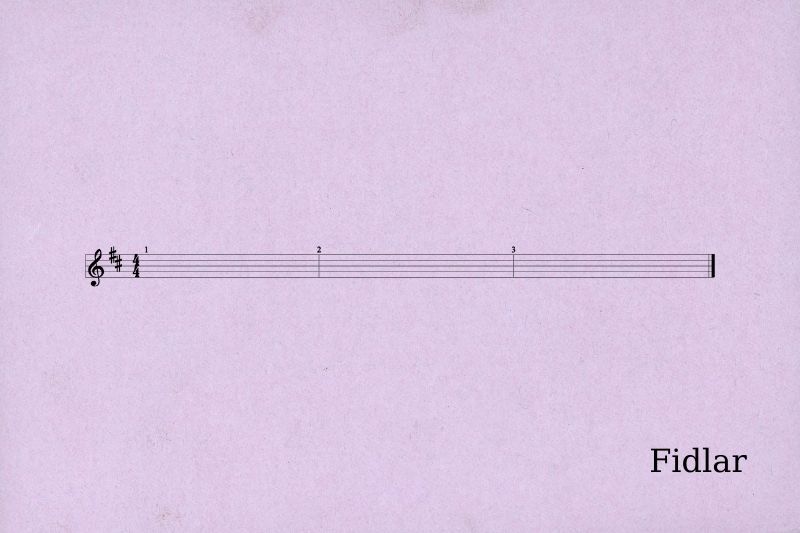 If the notes are too small to fit on the staff, the ledger lines will appear below or above the staff to indicate the spaces and lines. 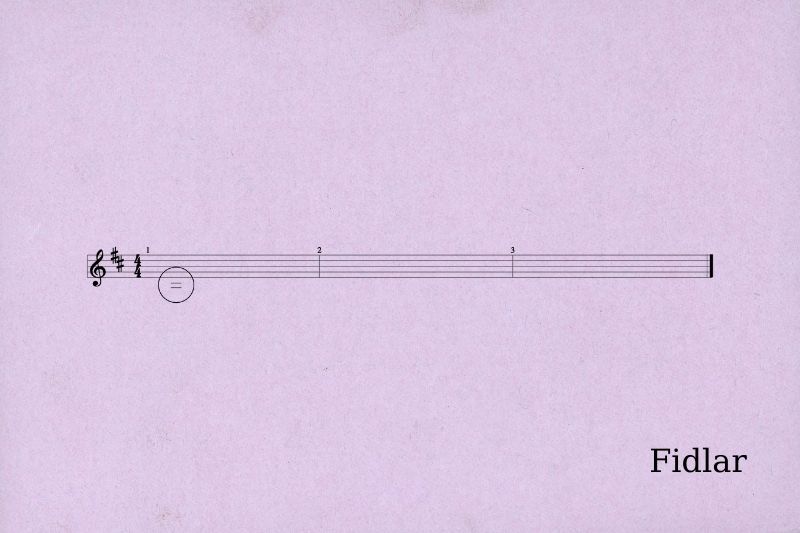 The treble-clef symbols help you identify where the notes are on lines and spaces. The treble clef circle the line that represents the G note in guitar sheet music. 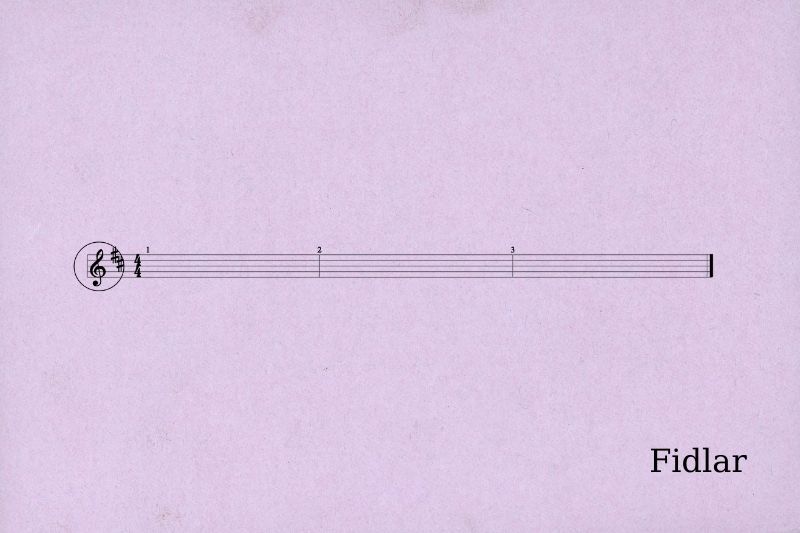 Use FACE to remember which notes correspond with which spaces.

Use the acronym Every Good Boy Does Fine to remember which notes each line corresponds to. 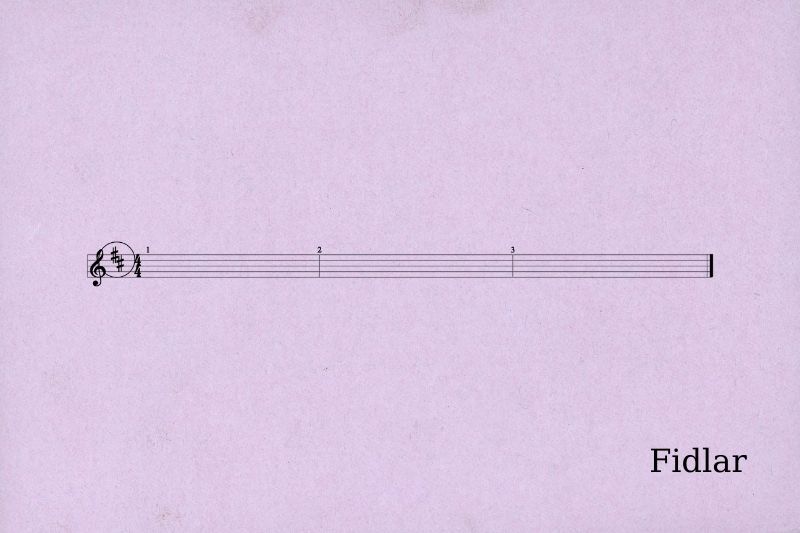 If a note is not part of naturally occurring key signature, it will be marked using the flat, sharp, or natural symbol. You can deep dive into this article to know exactly what is accidental in music theory.

The time signature is represented by two numbers located right next to the treble clef. The top number is the beat per bar, or measure, while the bottom number shows which notes are played.

For example, 4/4 would mean that for each measure, you will count four quarter notes (top number) and 4 (bottom number). 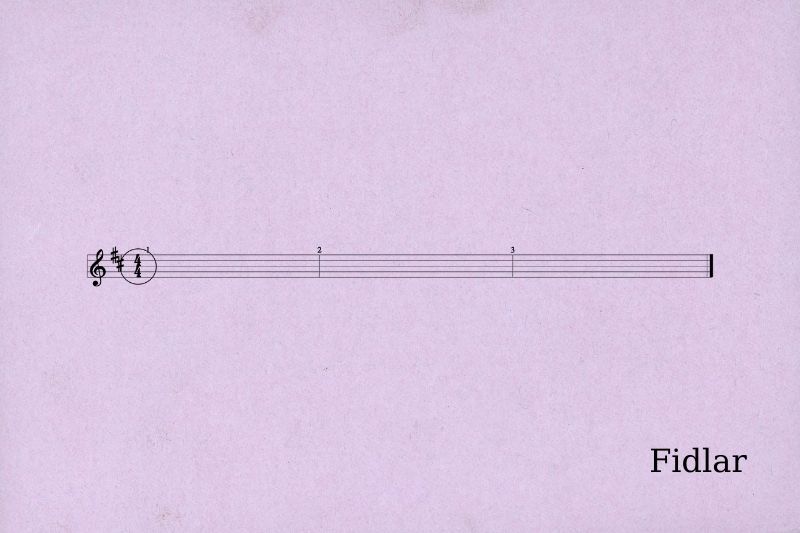 Read the article for details: https://fidlarmusic.com/what-is-a-bar-in-music/ 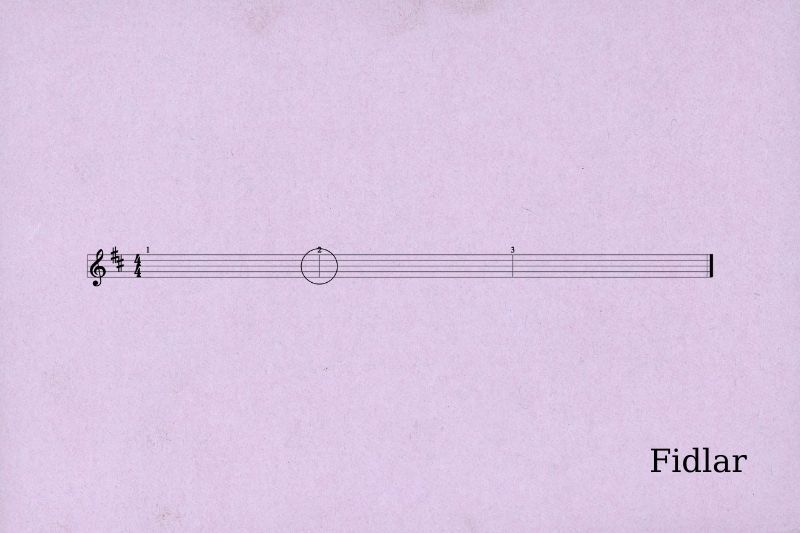 Let’s now take a look at each note value.

I will use both terms for music. These terms are called different things depending on where they are. American music uses terms such as a whole note, half-note, etc. The British terms for music are semibreve and minim.

Because the names of the notes are more clear, I prefer American terms. However, if you live outside the USA you might need to be familiar with other terms. I have included them as an extra for your convenience.

The entire note is 4 beats long and takes 4 seconds. It lasts for the entire bar in 4:4 seconds.

If you wanted to play this note, you would first play the second fret G string. Hold the note for four beats. Tap your feet with a steady rhythm. Each 4th tap of your foot equals a bar. You can hold the whole note for four taps.

A half note lasts half the time as a whole note. It makes sense, right? This is why I love the American system.

Now imagine tapping your foot and the note will play for two taps. You can play the note again after two taps, and it will continue for 2 taps.

The note will only last one tap of your foot if you tap your foot or listen to a metronome. You will be playing 4 A notes at the same time you played the entire note.

A quarter note lasts half the time as an eighth note, while an eighth note takes eight times as long as a whole note. A bar contains 8 notes.

There are two notes for every tap of your foot when you tap your foot.

Although 4:4 is a one-time signature, the length of the notes is not affected.

If you have 3:4 times, for example, there will be 3 quarter notes instead of 4. Quarter notes last the same time as 4:4 time.

A dot next to a note indicates that you must multiply half the value of the note’s value by the note being played. A dotted half-note means that you count it as three beats rather than only two. 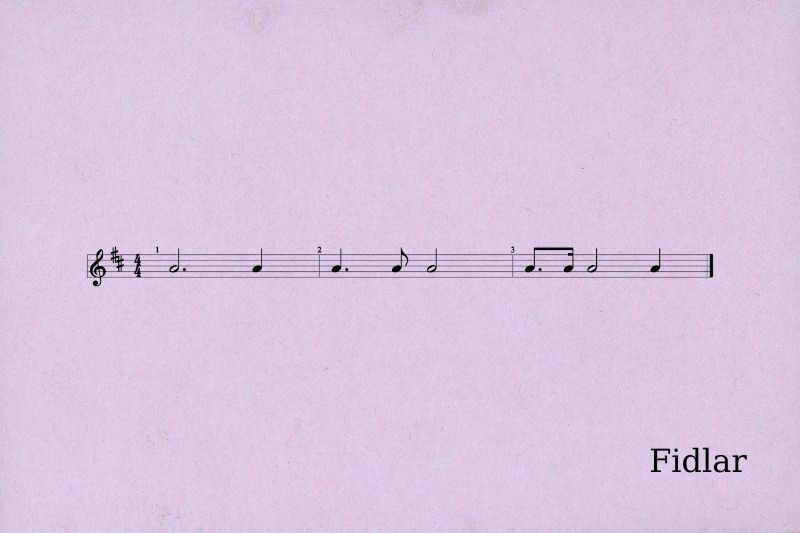 A tie is simply a curved line that indicates when two or more notes of the one-note should be played together.

Slurs, not to be confused with a tied note, are curved lines indicating when different notes should be played in continuous succession, without breaks in between. There are two types: pull-offs and hammer-ons.

Before you start learning how to read sheet music for guitar, you’ll need to practice reading the basics. These are slightly more complicated than just picking the string.

There are many ways to express hammer-ons in tab music. They may look something like “7h9” and “7^9” in tabs.

The repeat sign is a bar with two dots indicating you have to go back and play again when you see the first dots.

If you see a number beside or above a note, it indicates which string or finger to use. 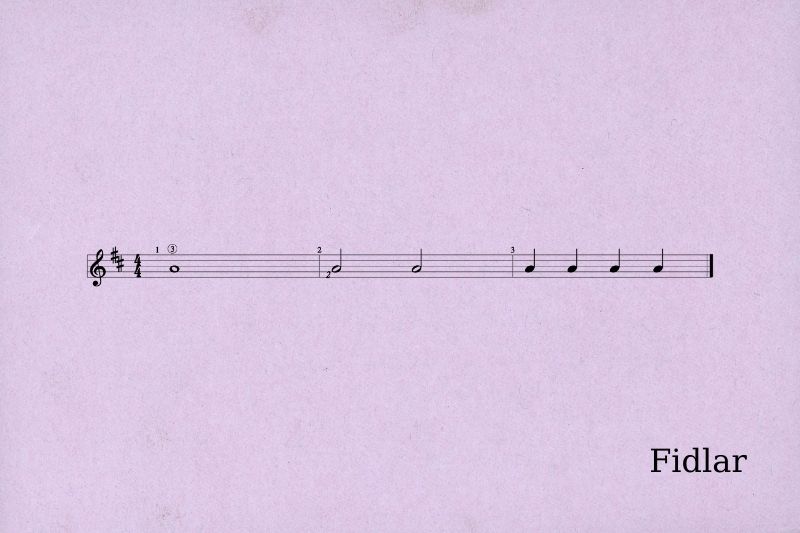 How To Read Music For Guitar

There are three main types of guitar sheet music:

However, we encourage you to continue learning each method.

Tabs are different from other types of sheet music because of the number on the line.

Each line represents a guitar string on the guitar.

The 6th string (lowest E string) is represented by the tab’s bottom line. The thickest string. The tab’s top line represents the 1st (high E) string. The thinnest string. This allows us to determine the order in which the notes are placed on the guitar strings (from highest to lowest).

Let’s look at an example: 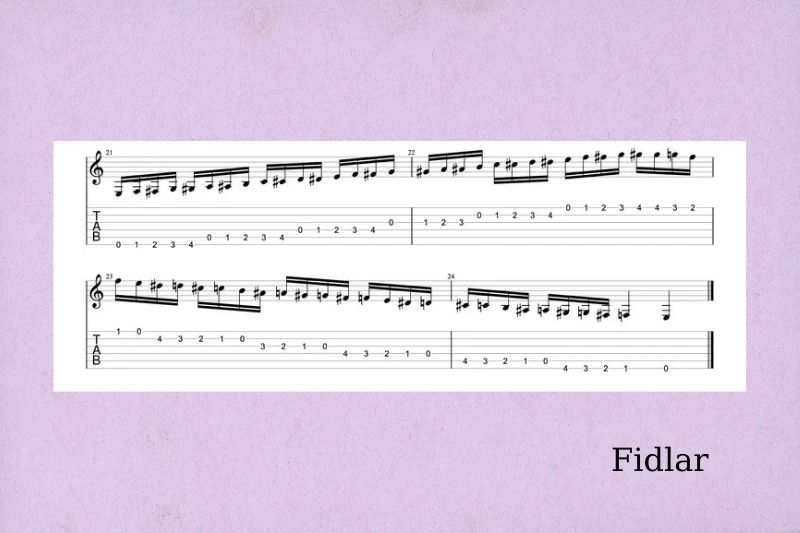 The tab shows that we are playing each note in the open position from the 4th fret to the 5th fret in order up and back down.

This method refers to the “formal” way of writing music. Most musicians mean that they can read traditional music when they say they can.

Below is an example of traditional notation for guitar. 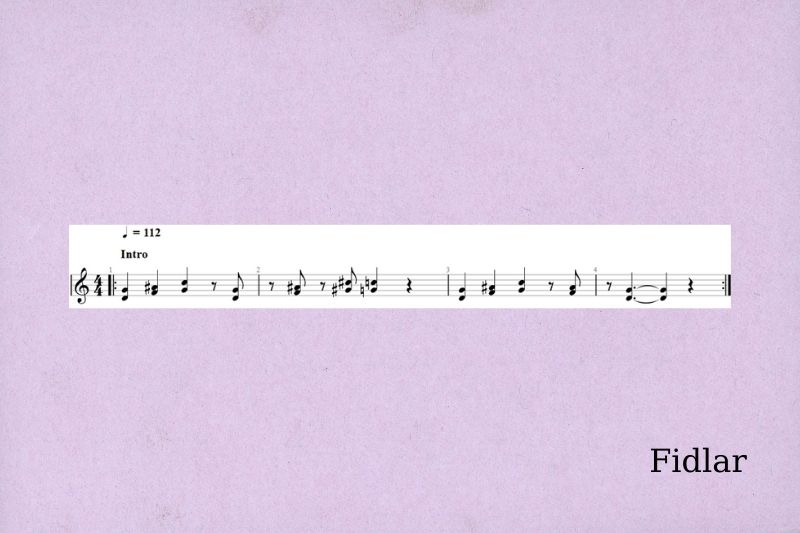 This is an example of how to play the intro for Smoke on the Water using traditional notation. You will need to be able to recognize the symbols and black dots in standard guitar notation.

A sheet music book will almost always use this method. However, sheet music now includes both traditional notations as well as Guitar TAB.

Here is an example of what you might get if you buy the sheet music for Smoke on the Water. 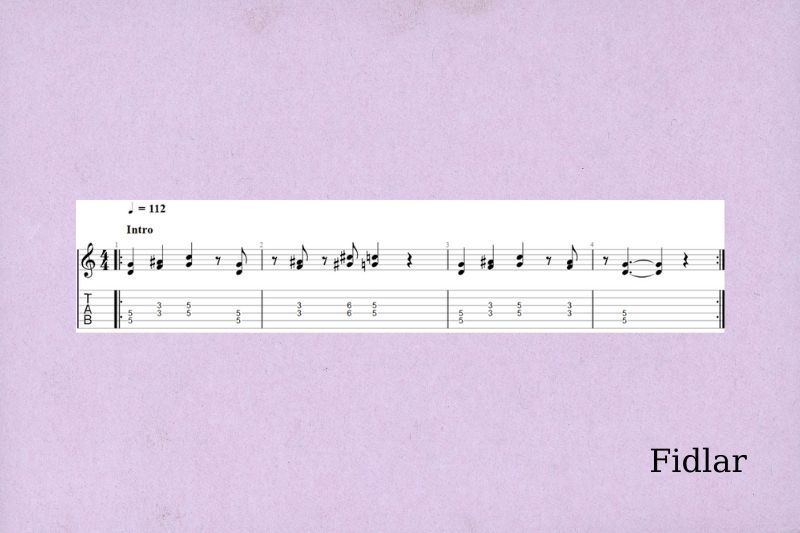 It may be evident that the traditional notation is the same as the one shown in the previous example. This time, however, it is linked to another with numbers and lines.

To display chords in sheet music form, we use chord boxes. Instead of having the strings be horizontally aligned, they are vertically aligned.

Guitarists may want to be able to read traditional notation and Guitar TAB, or both. However, some guitarists only need to know how to play and strum the chords.

There is an easy and quick way to learn how music can be read for your guitar. Chord diagrams show visual representations for different chord shapes that can be played on the guitar.

These are just a few examples of chord diagrams. 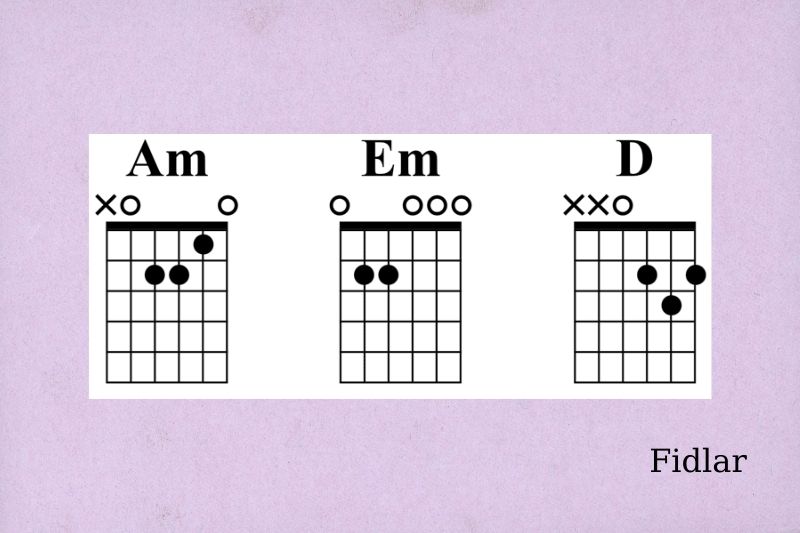 You will be able to read and play chord charts.

Many sheet music books have chord diagrams that are used in the songs. Then, list the chord names in the sheet music as highlighted below in yellow: 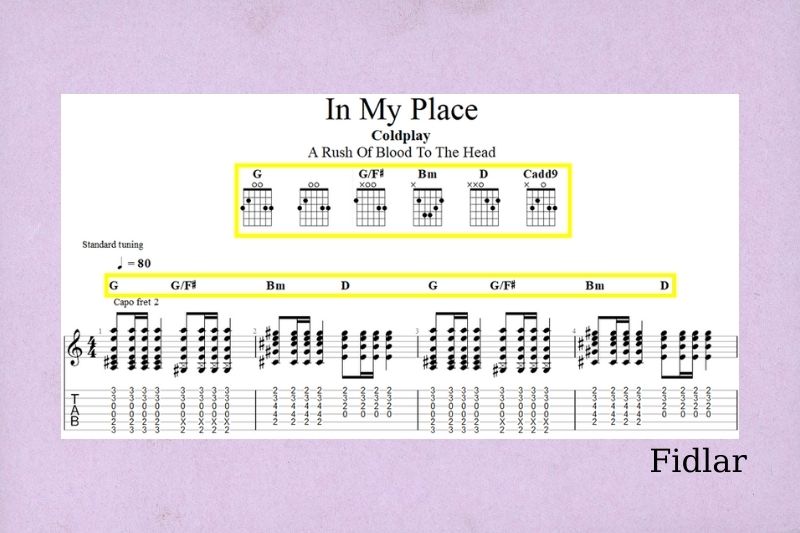 To learn the chords, use the diagrams. Then follow the changes in the chord names to switch between them. You can either learn how to read or rely on your ear to figure out the strumming pattern.

Where can I find sheet music using chord diagrams?

Many sheet music books include chord diagrams at each song’s beginning. This allows you to know which chords are essential. You can also lookup lyrics and chord sheets for any chord-based song once you can read chord diagrams.

These chord and lyric sheets will teach you all you need to play the song, except for the strumming patterns (sometimes included).

Here’s an example of an online chord sheet and lyric: 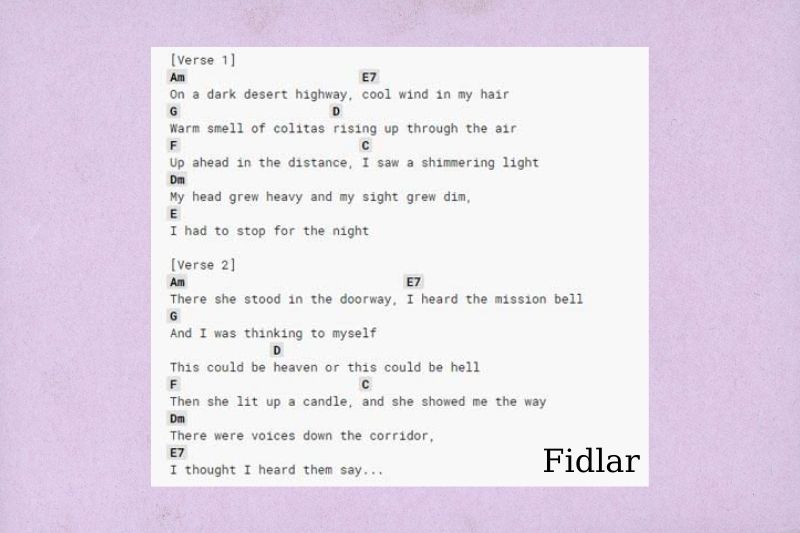 This sheet will help you to remember the chord names and when to change chords. Although you still have to learn the strumming patterns, once you master that skill, you will strum along to any song.

FAQs About How To Read Sheet Music Guitar Beginner

Are You Able To Read Music In Order To Play Guitar?

To play the guitar, you do not have to know how to read guitar sheet music. Many of the greatest guitarists do not know how music is read. However, that does not mean you should not learn how to read music. Your learning will be faster if you can read at least one written music for the guitar.

A beginner can learn traditional notation and Tab of Guitar in a matter of minutes. This will make it much easier to learn songs than learning them by ear.

Is Sheet Music For Guitar The Same As That For Piano?

Yes. The treble staff is used by both the piano and guitar, which are very similar instruments. The bass clef can also be used in piano music, which can then be modified to play the guitar. Transposing piano sheet music to be readable on the guitar will require the largest adjustment.

We hope you found this lesson helpful in learning how to read sheet music for guitar. While there are many other factors, these are the main points. You can add anything to the article by leaving a comment below. Thanks for reading! If you want to stay in the loop, bookmark this page or subscribe via email.